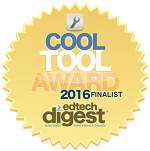 “This year’s program had some very stiff competition, hard decisions were made in selecting winners. We’re proud to honor these cool tools, leaders and trendsetters in education technology,” says Victor Rivero, who oversees the program as Editor-in-Chief of EdTech Digest.

In a recent post on Ed Tech Digest titled, “Energizing Education,” Rivero notes that 21st century education is in the middle of a paradigm shift and that the Cool Tools honorees represent ‘the best and brightest in the edtech space.’

“Technology is opening the door to a renaissance in education,” Rivero  says. “The edtech sector has experienced tremendous growth in the past several years, and there is also tremendous quality of products and very talented people out there.”

As universities make the switch to hosting large datasets in the cloud, they need a tested R&E solution tailored for the unique needs of the rigorous Internet2 NET+ service validation process.

The growth of the NET+ program has demonstrated the collaborate power of the higher education community working together and partnering with industry. The NET+  community includes a large and diverse group of universities – representing large and small; public and private higher ed institutions.

We will be part of two NET+ solutions showcased at the upcoming Internet2 Global Summit held in May in Chicago. Moderated by Internet2’s Sean O’Brien, the presentation will feature SkySync client Clifford Russell, CIO at Morehouse College, as well as MaryBeth Stuenkel, IT Program Manager and Victoria Green, Business Systems Analyst, both from the University of Michigan. The presentation will take place at 3 p.m. Wednesday, May 18.