Google and Microsoft have both created incredibly robust and effective file storage and collaboration platforms. Such as G Suite and OneDrive, for example. However, there are variances that complicate the matter of synchronizing or migrating Google Docs to OneDrive.

Organizations that are looking to consume both sets of APIs to transfer files across Google Drive and OneDrive are in for a rough ride. So we’ve compiled four key friction points between the Google and Microsoft platforms that you’ll want to be aware of before you try to synchronize or migrate your files.

Four things to remember before migrating Google Docs to OneDrive:

In most cases, organizations using Google Drive for storage are also using the full set of G Suite applications. Including Google Docs, Google Sheets, and Google Slides for instance. These file formats are unique to Google and are very different from the more standard format of Microsoft Office documents (Word, Excel, PowerPoint, etc.).

If not anticipated and accommodated for during the transfer, these Google file formats can cause issues for users when attempting to open or update their documents in OneDrive. It’s important that as part of the file migration or synchronization, Google files are exported in a way that keeps the content as close to the original as possible within the Microsoft platform – and vice versa.

Google & OneDrive both follow the concept of owner, editor, and reader. But the big differentiator is in is the way these systems store content. Google Drive stores data in one, centralized location. Permission levels on drives, folders, and documents are used to build a dynamic interface allowing users to visualize the content as needed. This allows them to have very complex scenarios. For example, Jethro’s Google Drive can have a folder that is owned by Krystal, containing a document owned by Brad. When Krystal logs into Google Drive, she will see whatever she needs to see. And she will be able to do whatever the permissions allow her to do. This same scenario applies to Brad.

In OneDrive, however, the storage is user-based, rather than centralized. Each user has their own site collection. No matter what the permissions are on any individual folder or document, the user is a super owner that can override any permissions within their OneDrive.

The way Google Drive and OneDrive manage these permissions should be accounted for in advance of moving any files. Organizations will need to define who in OneDrive will be the “super-owner” of the content. It’s also important to train users appropriately on the new functionality. The experience in OneDrive will be incredibly different than what end-users are used to seeing in Google Drive.

A common friction-point while migrating files across disparate platforms are the varying degrees of file naming restrictions across storage services. Some, like Google, are much more liberal with their filename allowances than others, such as Microsoft.

It’s important to understand this difference to avoid the risk of overwriting documents or failed file transfers while migrating or synchronizing the content across platforms.

Additionally, Google has virtually no restriction on characters allowed in file names. On the other hand, Microsoft has a very definitive list of unsupported characters including:

When doing the Google to OneDrive migration, containing these unsupported characters could cause a failed file transfer. Which in turn will be more than just an inconvenience during large scale, enterprise migration.

Similar to file names, Google and Microsoft have very different ideas of appropriate path lengths. Microsoft Office 365, OneDrive and SharePoint Online limit file paths at 400 characters. However, Google has no limit on path length. This key difference will cause nearly the same headache experienced with incompatible file names if one attempts to synchronize or migrate thousands of Google Docs to OneDrive that are well above Microsoft’s maximum file path length.

While these differences may seem obvious to someone familiar with both platforms, they can cause major problems when not accounted for during your Google to OneDrive migration. This is where a typical “lift-and-shift” approach will fall down, as reconciling many of these differences requires manual intervention. That could be thousands of hours depending on the volume of content in the migration project. What’s more, it could make a bi-directional synchronization nearly impossible. 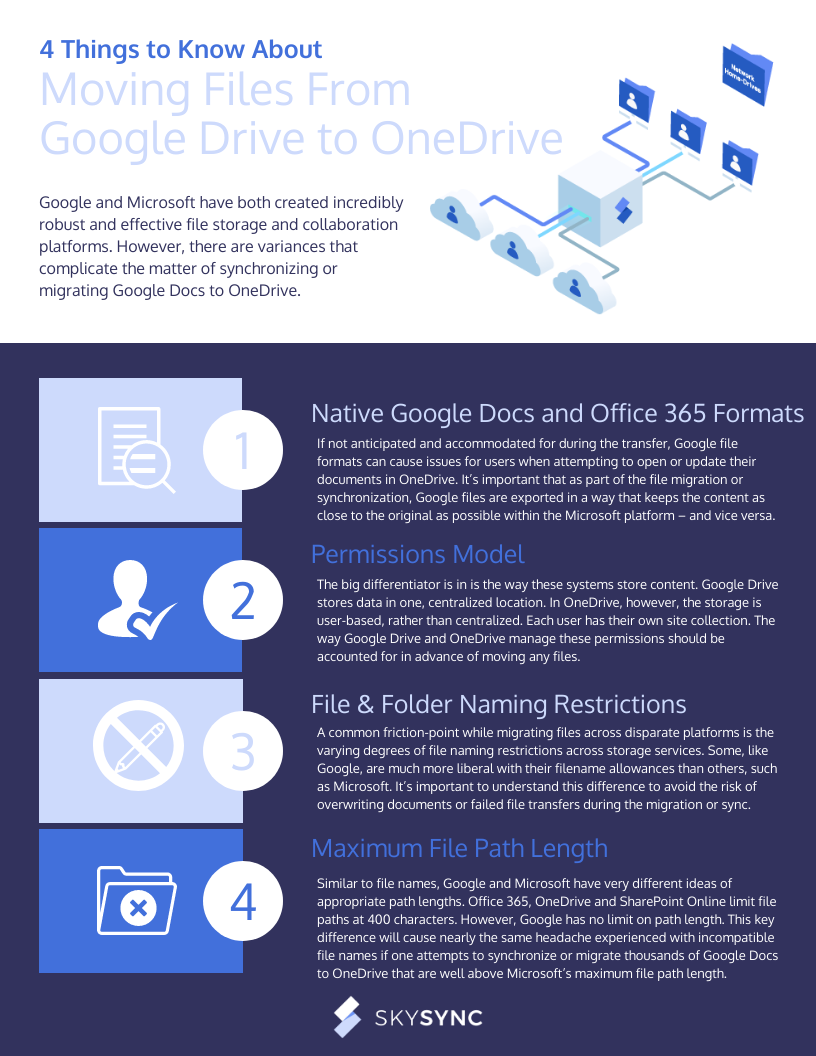